Even when he made a perfect shot, his opponent caught a lucky bounce and beat him.

Things went so bad, his teammates started quoting the Psalms. “You can’t say our cup runneth over,” one of them said.

In the end, however, Martin was gracious in defeat.

“God must’ve understood his ego needed it more than mine,” Martin joked afterward with a group of onlookers.

His response sums up the spirit of the Friars’ Briar, a clergy version of the Tim Hortons Brier, the annual Canadian men’s curling championship, which ended Sunday. 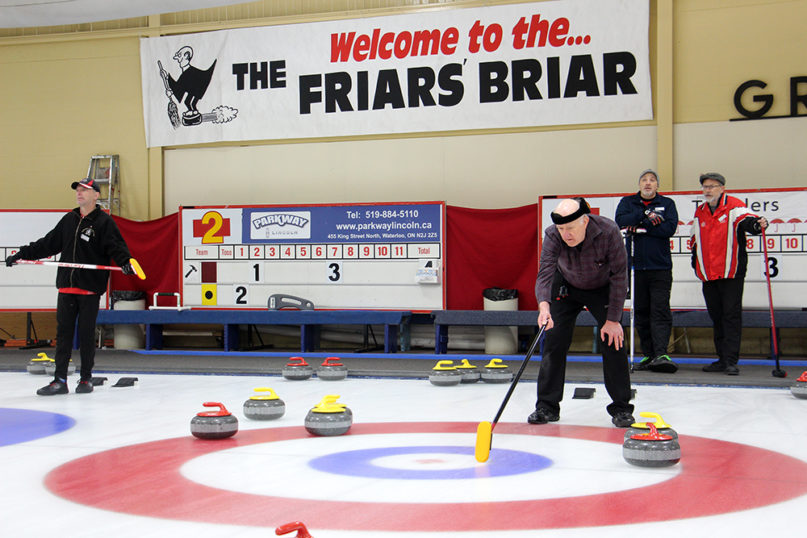 The five-day co-ed clergy curling tournament has been held parallel to the Brier since 1978, usually traveling to the same provinces as its more competitive counterpart.

It tweaked the spelling of the event to stay out of trouble with the Curling Canada-sanctioned tournament. It also ended Friday to give curlers the chance to return to their pulpits.

And it lends itself more easily to puns about the “rather un-kosher sounding ‘hog line,’” the “temple of brooms” and letting he who is without sin “cast the first stone.”

The idea for the tournament came during the late 1970s, a divisive moment in Canadian history, according to Martin, who — when not “skipping,” or leading, a team — is executive minister of the Mennonite Church of Eastern Canada and past president of the Friars’ Briar Association board.

“Clergy at the time … basically said, ‘We can do better than that in the church,’” he said. “‘Why don’t we build some east-west bridges and do something fun together and bring clergy together across the country?’” This year, the Friars’ Briar drew 18 teams of four curlers each from across Canadian provinces and Christian traditions — including Mennonite, Lutheran and United Church of Canada churches — to the KW Granite Club on the University of Waterloo campus. The event, which ran March 2 to 9, also drew a small crowd of fans from the nearby First United Church of Waterloo to cheer on the team led by their pastor, the Rev. Kellie McComb.

Weiss, a rabbi at Temple Har Zion in Thornhill, Ontario, first came to the Friars’ Briar in 2016 with a team of rabbis and cantors who curled together Monday mornings in the Greater Toronto Interfaith Curling Club. They called themselves the Frozen Chosen and wore jackets emblazoned in Hebrew with the phrase, “Blessed is my rock,” a nod to Psalms 18:46.

Weiss has been back every year since — this year, as vice skip on a team led by a retired United Church minister.

In between tournaments, the rabbi has preached at churches led by clergy he has met curling and organized benefit concerts with a blended synagogue-church choir. Kevin Peters Unrau, pastor of Hillcrest Mennonite Church in New Hamburg, Ontario, slides out of the hack to make a shot on Thursday, March 5, 2020, during the Friars’ Briar, an annual Canadian clergy curling tournament held this year at the KW Granite Club in Waterloo, Ontario. RNS photo by Emily McFarlan Miller

The tournament gives clergy the chance to enjoy some fun and games, according to Pam Bartel, president of the Friars’ Briar Association board and skip of a team in this year’s tournament.

It also gives them a chance to learn from one another.

Bartel said she has learned while “broomstacking,” or sharing conversation and usually a drink with other curlers after a game, how differently Christians and Jews approach Scripture. She has also learned how similar clergy jokes are across traditions.

“I think that we’re stronger for the dialogues that we have with each other,” said Bartel, a layperson who works at Conrad Grebel University College at the University of Waterloo, which is affiliated with the Mennonite Church of Eastern Canada.

“When you’re on the ice, you’re just curling,” she said. “Most of the time you’re not having theological discussions or talking about people’s faith background. You’re just thinking about the shots.”

In addition to sliding rocks down a sheet of ice and sweeping in front of them to guide them straighter and farther toward a target-like “house” at the other end, curling emphasizes good sportsmanship, known as the “spirit of curling.” That includes exchanging handshakes with opponents before, and broomstacking with them after, a game and being honest if one “burns,” or touches, a rock as it travels down the ice. 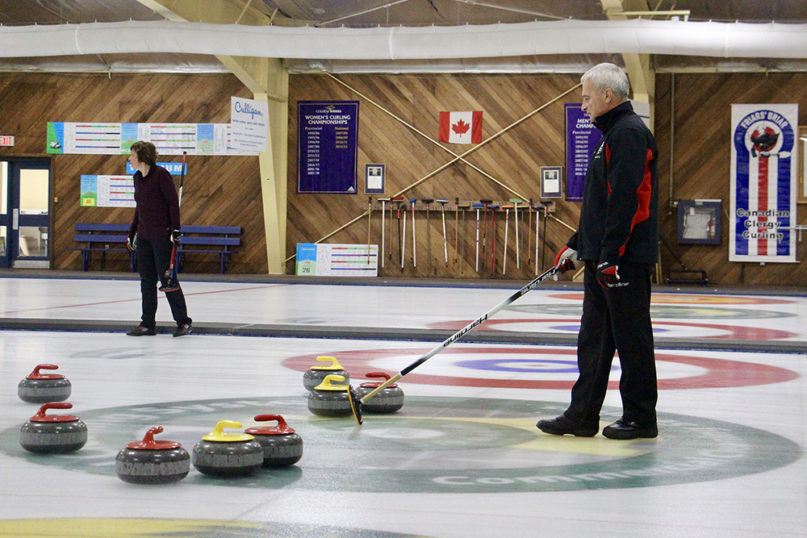 A skip calls a shot for his team on Thursday, March 5, 2020, during the Friars’ Briar, an annual Canadian clergy curling tournament held this year at the KW Granite Club in Waterloo, Ontario. RNS photo by Emily McFarlan Miller

Those are opportunities for clergy to practice what they preach, according to Bartel.

“We talk grace and mercy, all of those things that the church teaches, but you get out on the ice and you get an opportunity to practice those things,” she said.

At the Friars’ Briar, each team must have at least one curler who is a member of the clergy or connected to a faith-based organization as its skip or vice skip. Those rules have loosened up since the earliest Friars’ Briar, according to Reid Kennel, a layperson who works for the Mennonite Central Committee and plays second on Team Bartel. 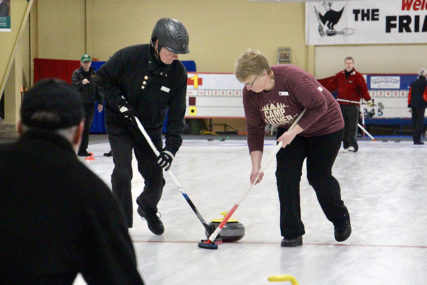 Curlers sweep in front of their team’s rock on Thursday, March 5, 2020, during the Friars’ Briar, an annual Canadian clergy curling tournament held this year at the KW Granite Club in Waterloo, Ontario. RNS photo by Emily McFarlan Miller

That’s because the tournament has the same concerns about attracting younger members that many religious institutions do, Kennel said.

“I don’t think it’s that young people aren’t as concerned with their spiritual lives or the metaphysical realm or whatever it is. I think it’s just large churches and the institutional politics really scare people away,” he said.

Kennel — who is 25 and several decades younger than the rest of his team — said his friends are interested in the kind of conversation and community that comes with something like the Friars’ Briar.

What drew him to the tournament was an invitation from Bartel when he was in residence at the school where she works and the warm welcome he received from his fellow curlers.

Kennel said it was refreshing to spend time with a mix of people of different ages. The fact that they all represented a mix of different faiths, too, “flies in the face of what a lot of people see as very closed off religious experience,” he said.

The tournament has become so important to him, he has not only joined its board as vice president but has also had the Friars’ Briar logo — a broom-wielding cleric in a billowing robe perched on a speeding rock — tattooed on his ankle.

“It was so immediately welcoming, why wouldn’t I want to invest myself here?” 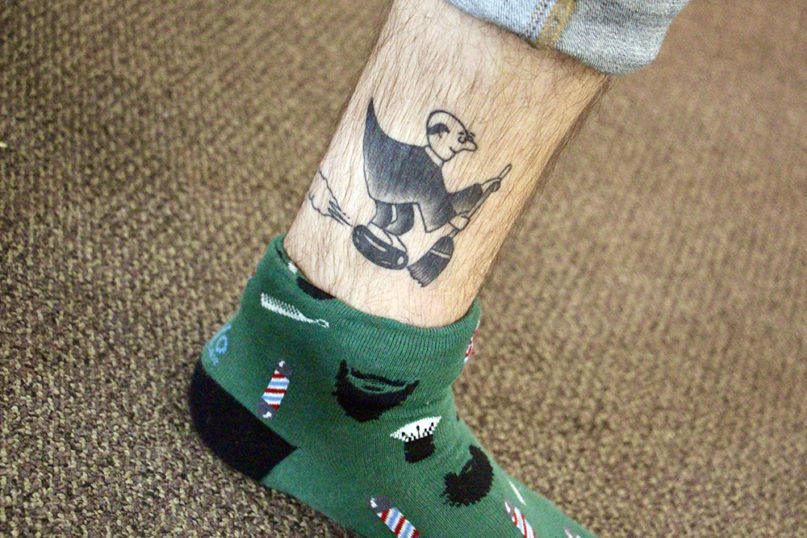 Friars’ Briar Association vice president Reid Kennel, who works for the Mennonite Central Committee, shows off his tattoo of the Friars’ Briar logo on Friday, March 6, 2020, during the Friars’ Briar, an annual Canadian clergy curling tournament held this year at the KW Granite Club in Waterloo, Ontario.RNS photo by Emily McFarlan Miller

The Drawmaster has spoken and the Round Robin event draws for Monday through Wednesday are now available.  There are 18 Teams in this year’s Friars’ Briar event in Waterloo, Ontario.  Unfortunately, a number of ‘western’ teams could not muster teams this year. Ontario, however, has come through with fully 15 teams (with a bit of assistance from Wisconsin!) to make the event viable for this year.

The groupings for the Round Robin event are the following:

Two issues are to be noted for this year’s FB.  The first is that draws begin Monday morning (as evening  times are not available at the rink)  Teams were warned, therefore, to arrive on Sunday so as to be available for the Monday draws.  Secondly, as evenings will be ‘free time’ (save for the Thursday banquet), the planning committee is providing options to visit facilities in Waterloo or watching the ‘big Brier’ on television.

The planning committee is anxiously awaiting arrival of teams and some good curling during the week.

See the Schedule of Events

See the Schedule for the Round Robin Event

(Click on picture to enlarge, then Copy/Paste to your Word or other ‘document’ program for printing)

Draw Schedule for the Seeding Round Robin

Now that one knows who the ‘competition’ is in your Group, the Drawmaster has completed the Schedule for the Seeding Round Robin event for Monday through Wednesday.  Be prepared for some back-to-back games as a result of 24 teams playing on 8 sheets of ice.

In order to prepare for ‘ties’ in rankings at the end of the Round Robin series, there will be 2 extra ends for each draw on Monday to prepare for such eventuality.  Look up Rules of Game for the Friars’ Briar to see details for playing these ends.

And now, as everyone is waiting to know, the Round Robin schedule can be found here.

Round Robin Groups are Chosen….

The Drawmaster (and his little elves) has drawn up the Groups for the Seeding Round Robin event.  The schedule will be posted shortly, but it is evident that ALL the Manitoba teams (save for the Epp and Mystery Rocks teams) will be the only teams playing the Monday afternoon draw (3:00 pm)